Toyota CEO Agrees With Elon Musk: We Don’t Have Enough Electricity to Electrify All the Cars

Let’s stipulate a couple of facts right at the top: Toyota makes a lot of cars, so many that it’s the world’s largest or second-largest auto manufacturer every year. Toyota makes a lot of good, reliable cars. The Corolla, for instance, may not be flashy but the little things will go for a quarter-million miles or more and they mostly just run without breaking down much. Change the oil when you’re supposed to and you’re probably good to go.

Let’s stipulate one more fact: Whether cars keep burning gas or run on electricity, Toyota is poised to make and sell millions of electric vehicles. It already has the game-changing solid-state battery coming on line. It launched the Prius way back in 1997. Toyota has not only not resisted the adaptation of EVs, it has led the way. Fundamentally, Toyota does not care if cars are powered by gas or nuclear fusion engines as long as it maintains its position and sells millions of them.

So Toyota CEO Akio Toyoda’s comments at the company’s year-end press conference deserve notice and no little amount of respect. He knows more about cars and their economic ecosystem than just about anyone else on the planet.

The Wall Street Journal was in attendance and noted the CEO’s disdain for EVs boils down to his belief they’ll ruin businesses, require massive investments, and even emit more carbon dioxide than combustion-engined vehicles. “The current business model of the car industry is going to collapse,” he said. “The more EVs we build, the worse carbon dioxide gets… When politicians are out there saying, ‘Let’s get rid of all cars using gasoline,’ do they understand this?”

CarBuzz has mischaracterized Toyoda’s comments. It’s not “disdain for EVs” he’s expressing. It’s disdain for the failure to count the cost of what politicians are proposing. More EVs will demand more electricity.

Toyoda is getting at two things. One, EVs are not powered by magical unicorn emissions, they are powered by the means we use to generate electricity. In Japan, the United States, and everywhere else, that’s fossil fuels to the tune of a huge majority of our electric power generation (61% in the U.S., with wind and solar making up about 17%, while Japan relies more heavily on nuclear power than most due to its lack of indigenous oil). Imagine taking every car in Japan or the United States and powering it not by gasoline or diesel, but by electricity. This will require a dramatic expansion of the amount of electric power we currently generate. There is no getting around this fact. We would be displacing gasoline or diesel for another power source. We’re still pulling something out of the ground and burning it in some way. The main question is where is it being burned?

How will we generate power to meet the new level of demand? Some will claim we can do it by ramping up renewables — wind and solar — but that’s not realistic. Drive out through West Texas between Llano and San Angelo out to Midland-Odessa and you’ll see a curious sight: hundreds and hundreds of towering windmills. Those are just the ones you can see from the road. There are more of them farther from the beaten paths. That part of Texas generates more wind power than the entire state of California. Wind farms cover mile after mile after mile. But all those hundreds of windmills only generate about 15% of Texas’ electricity. Wind is not economically competitive yet, so it’s subsidized by the government. Neither wind nor solar are cheap or reliable enough to displace oil and especially natural gas in our grid. The wind doesn’t always blow and the sun doesn’t always shine. Oil and natural gas always burn.

Texas is just one state, but it happens to be a great one to study on this issue because it has its own power grid (no other state does) and it produces more energy than any other state within its own borders. You’d find yourself covering thousands and thousands of square miles with those windmills across West Texas just to significantly close the gap on oil and natural gas. Currently the ratio is about 4 to 1 in favor of oil and natural gas over wind and solar, and that’s just for electric power. The ratio for vehicles is much more lopsided at this point.

The second issue Toyoda is getting at is that petroleum isn’t just a fuel, it’s the foundation of thousands upon thousands of products we rely on every day. Cars alone have plastic and other petroleum-based parts throughout their systems and interiors. There is, as of yet, no reliable or economical replacement for the petroleum used to manufacture those parts. So if oil and natural gas stop coming out of the ground tomorrow, once the supply has gone through all the refining and other processes, our entire way of life takes a wallop.

If the politicians who are pushing to ban gas cars and force everyone over to EVs with renewables at their present or near-future state of development do understand any of this, they’re not letting on. They’ll wreck modern industry.

Toyoda isn’t alone in this reality check. Elon Musk recently sounded a similar note. Note well that he also has no “disdain” for EVs. He’s building his empire on EVs, and his Teslas make EVs flashy and desirable. Yet he’s sounding a similar warning to Toyoda’s. 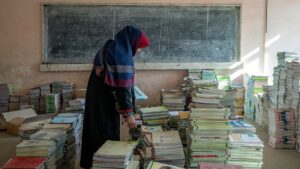